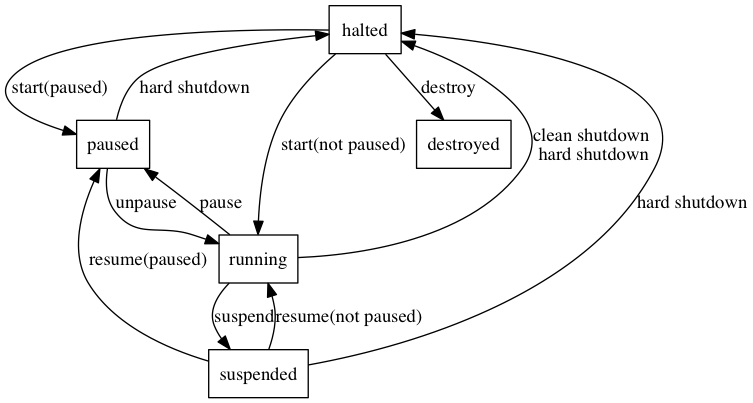 The figure above shows the states that a VM can be in and the API calls that can be used to move the VM between these states.

The VM class contains a number of fields that control the way in which the VM is booted. With reference to the fields defined in the VM class (see later in this document), this section outlines the boot options available and the mechanisms provided for controlling them.

VM booting is controlled by setting one of the two mutually exclusive groups: “PV”, and “HVM”. If HVM.boot_policy is the empty string, then paravirtual domain building and booting will be used; otherwise the VM will be loaded as an HVM domain, and booted using an emulated BIOS.

If the bootloader is pygrub, then the menu.lst is parsed if present in the guest’s filesystem, otherwise the specified kernel and ramdisk are used, or an autodetected kernel is used if nothing is specified and autodetection is possible. PV/args is appended to the kernel command line, no matter which mechanism is used for finding the kernel.

When using HVM booting, HVM/boot_policy and HVM/boot_params specify the boot handling. Only one policy is currently defined: “BIOS order”. In this case, HVM/boot_params should contain one key-value pair “order” = “N” where N is the string that will be passed to QEMU.