Snapshots represent the state of a VM, or a disk (VDI) at a point in time. They can be used for:

Read more about the Snapshot APIs.

Disks are represented in the XenAPI as VDI objects. Disk snapshots are represented as VDI objects with the flag is_a_snapshot set to true. Snapshots are always considered read-only, and should only be used for backup or cloning into new disks. Disk snapshots have a lifetime independent of the disk they are a snapshot of i.e. if someone deletes the original disk, the snapshots remain. This contrasts with some storage arrays in which snapshots are “second class” objects which are automatically deleted when the original disk is deleted.

Disks are implemented in Xapi via “Storage Manager” (SM) plugins. The SM plugins conform to an api (the SMAPI) which has operations including

The existing “EXT” and “NFS” file-based Xapi SM plugins store disk data in trees of .vhd files as in the following diagram: 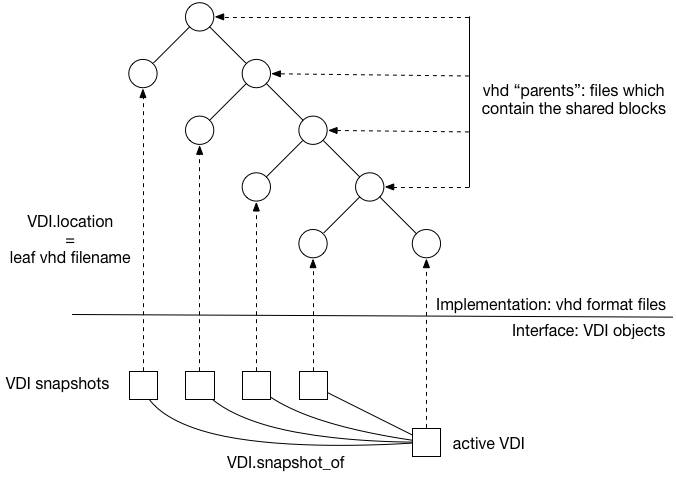 From the XenAPI point of view, we have one current VDI and a set of snapshots, each taken at a different point in time. These VDIs correspond to leaf vhds in a tree stored on disk, where the non-leaf nodes contain all the shared blocks.

The vhd files are always thinly-provisioned which means they only allocate new blocks on an as-needed basis. The snapshot leaf vhd files only contain vhd metadata and therefore are very small (a few KiB). The parent nodes containing the shared blocks only contain the shared blocks. The current leaf initially contains only the vhd metadata and therefore is very small (a few KiB) and will only grow when the VM writes blocks.

File-based vhd implementations are a good choice if a “gold image” snapshot is going to be cloned lots of times. 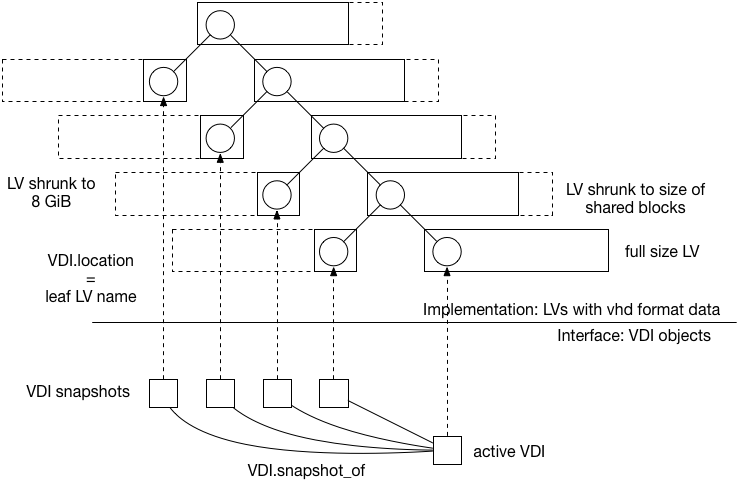 Non-snapshot VDIs are always stored full size (a.k.a. thickly-provisioned). When parent nodes are created they are automatically shrunk to the minimum size needed to store the shared blocks. The LVs corresponding with snapshot VDIs only contain vhd metadata and by default consume 8MiB. Note: this is different to VDI.clones which are stored full size.

Block-based vhd implementations are not a good choice if a “gold image” snapshot is going to be cloned lots of times, since each clone will be stored full size.

A hypothetical Xapi SM plugin could use LUNs on an iSCSI storage array as VDIs, and the array’s custom control interface to implement the “snapshot” operation: 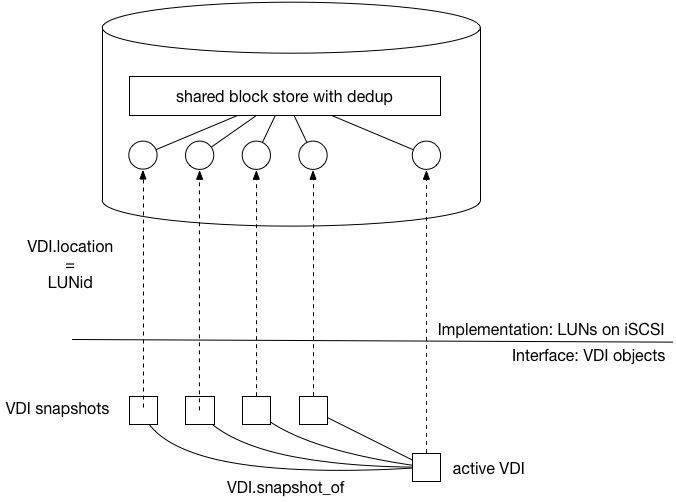 From the XenAPI point of view, we have one current VDI and a set of snapshots, each taken at a different point in time. These VDIs correspond to LUNs on the same iSCSI target, and internally within the target these LUNs are comprised of blocks from a large shared copy-on-write pool with support for dedup.

There is no current way to revert in-place a disk to a snapshot, but it is possible to create a writable disk by “cloning” a snapshot.

Let’s say we have a VM, “VM1” that has 2 disks. Concentrating only on the VM, VBDs and VDIs, we have the following structure: 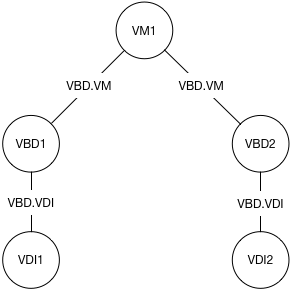 When we take a snapshot, we first ask the storage backends to snapshot all of the VDIs associated with the VM, producing new VDI objects. Then we copy all of the metadata, producing a new ‘snapshot’ VM object, complete with its own VBDs copied from the original, but now pointing at the snapshot VDIs. We also copy the VIFs and VGPUs but for now we will ignore those.

This process leads to a set of objects that look like this: 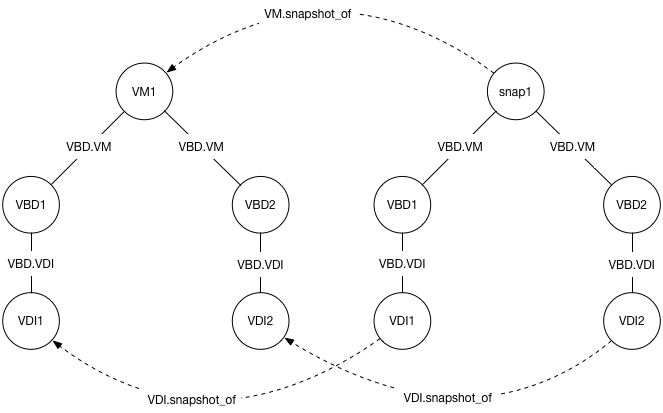 We have fields that help navigate the new objects: VM.snapshot_of, and VDI.snapshot_of. These, like you would expect, point to the relevant other objects.

When a snapshot is deleted Xapi calls the SM API vdi_delete. The Xapi SM plugins which use vhd format data do not reclaim space immediately; instead they mark the corresponding vhd leaf node as “hidden” and, at some point later, run a garbage collector process.

The garbage collector will first determine whether a “coalesce” should happen i.e. whether any parent nodes have only one child i.e. the “shared” blocks are only “shared” with one other node. In the following example the snapshot delete leaves such a parent node and the coalesce process copies blocks from the redundant parent’s only child into the parent: 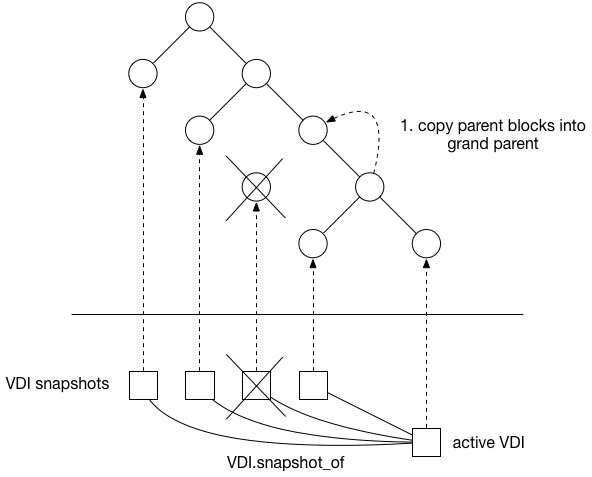 Note that if the vhd data is being stored in LVM, then the parent node will have had to be expanded to full size to accommodate the writes. Unfortunately this means the act of reclaiming space actually consumes space itself, which means it is important to never completely run out of space in such an SR.

Once the blocks have been copied, we can now cut one of the parents out of the tree by relinking its children into their grandparent: 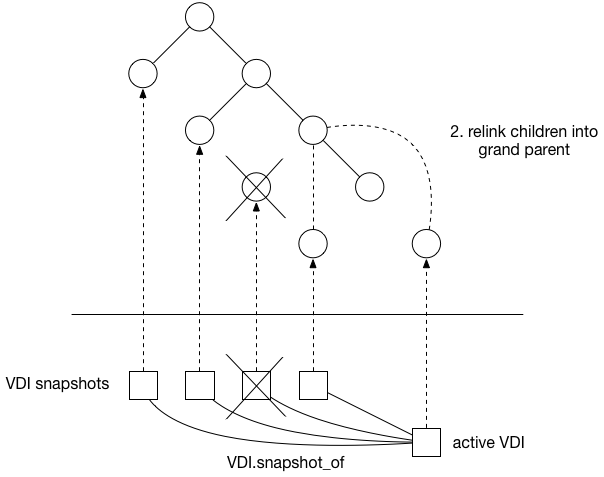 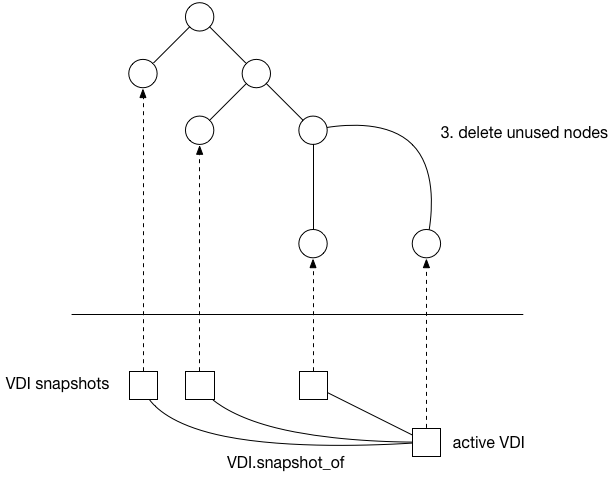 The XenAPI call VM.revert overwrites the VM metadata with the snapshot VM metadata, deletes the current VDIs and replaces them with clones of the snapshot VDIs. Note there is no “vdi_revert” in the SMAPI.

This is the process by which we revert a VM to a snapshot. The first thing to notice is that there is some logic that is called from message_forwarding.ml, which uses some low-level database magic to turn the current VM record into one that looks like the snapshot object. We then go to the rest of the implementation in xapi_vm_snapshot.ml. First, we shut down the VM if it is currently running. Then, we revert all of the VBDs, VIFs and VGPUs. To revert the VBDs, we need to deal with the VDIs underneath them. In order to create space, the first thing we do is delete all of the VDIs currently attached via VBDs to the VM. We then clone the disks from the snapshot. Note that there is no SMAPI operation ‘revert’ currently - we simply clone from the snapshot VDI. It’s important to note that cloning creates a new VDI object: this is not the one we started with gone.